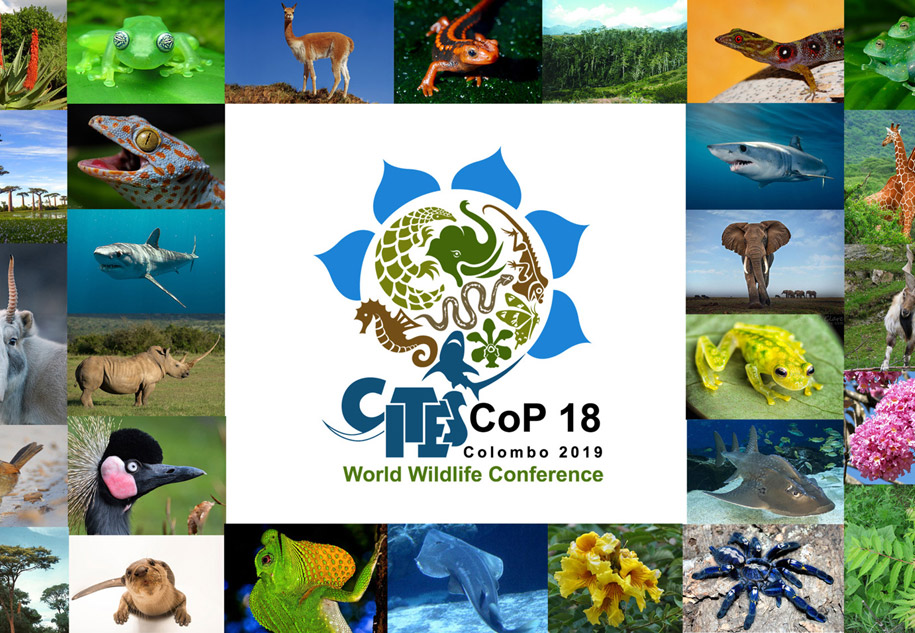 Introduction
Parties to the Convention on International Trade in Endangered Species of Wild Fauna and Flora (CITES) met in Geneva from 17 to 28 August to adopt decisions and resolutions to mitigate negative impacts of international trade on wild plants and animals. As clear and enforceable rules based on sound science and effective policies are vital for protecting natural wealth and achieving the 2030 Sustainable Development Goals, CITES sets the rules for international trade in wildlife in an attempt to prevent and reverse trade-related declines in wildlife populations.

Proposals and decisions
Governments have submitted 56 new proposals to change the levels of protection that CITES provides for species of wild animals and plants that are part of the international trade. Proposals that concerned South Africa in particular, will be discussed briefly below.

Central African Republic, Chad, Kenya, Mali, Niger and Senegal to list giraffe on Appendix II as a precautionary measure to help curb the species’ ongoing decline over large parts of its distribution. SADC countries opposed the listing as giraffe populations in SADC range states were stable and in no threat as a result of trade. However, the proposal was successful,l which means that all international trade in giraffe and hunting trophies will now be subject to CITES permits.

Aloe ferox is an aloe with popular medicinal uses that was earlier listed in Appendix II to prevent overexploitation. South Africa asked for seeds and finished products from artificially propagated plants to be exempted as it was argued that this would enhance local livelihoods and simplify permitting and enforcement. The proposal was adopted.

The population of southern white rhinos in Eswatini (Swaziland) is listed on Appendix II. They submitted a proposal to change an annotation that currently prevents international trade to allow them to trade in existing stock of 330 kg of rhino horn and then 20 kg per year from non-lethal harvesting. Namibia proposed the transferring of its population from Appendix I to II with an annotation that would allow the sale of live animals to appropriate and acceptable destinations and for hunting trophies, with all other specimens to remain on Appendix I. Both these proposals were rejected. South Africa submitted no proposal on white rhino.

As far as black rhino is concerned, South Africa has been successful in its proposal to increase its export quota for hunting trophies of the subspecies Diceros bicornis, from five adult males to a total number of adult male black rhinos not exceeding 0.5% of South Africa’s total black rhino population. Based on 2017 population number, this change will increase the number of black rhinos that can be hunted each year in South Africa from five to a maximum of 10 animals, All three black rhino subspecies have increased in South Africa, from approximately 800 animals in 1992, to 2,046 at the end of 2017. A revision has been added to provide a ‘safety net’ - the percentage quota approach would stop if rhino numbers fall under a specified science-based threshold which must still be determined.

Several elephant related proposals were considered at CoP18. Elephants were moved from CITES Appendix II to CITES Appendix I in 1989, after decades of ivory poaching had greatly reduced many populations. Recognizing that some southern African elephant populations were healthy and well managed, CITES agreed to downlist the populations of Botswana, Namibia, South Africa and Zimbabwe to Appendix II in 2000. In 2008, sales of registered stocks of government-owned ivory from these countries were authorized to China and Japan. At CoP18, Zambia proposed to downlist its elephant population from Appendix I to Appendix II to permit sales of registered ivory stocks to CITES-approved buyers as well as some specified non-ivory trade. Botswana, Namibia, South Africa and Zimbabwe proposed an annotation to enable trade in registered ivory stocks to Secretariat-verified partners as well as some specified non-ivory trade. Burkina Faso, Co^te d’Ivoire, Gabon, Kenya, Liberia, Niger, Nigeria, Sudan, Syrian Arab Republic and Togo however proposed that elephant populations of Botswana, Namibia, South Africa and Zimbabwe be moved from Appendix II to Appendix I. None of these proposals were adopted. In South Africa, local trade in ivory is allowed under permit.

However, amendments were adopted that would restrict the definition of “appropriate and acceptable destinations” with regard to trade in live African elephants only to areas that are in situ conservation programmes, or secure areas
within the natural range of the species and not to zoos.

The proposal to include Woolly Mammoth in Appendix II was withdrawn and the Secretariat requested to conduct a review of the impact of trade in mammoth ivory on illegal trade in elephant ivory and report to CoP19.

Balearica pavonina, the Black crowned-crane, was moved to Appendix I. The black-crowned crane is listed as Vulnerable on the IUCN Red List and is experiencing a rapid population decline primarily due to habitat loss and trapping for domestication or illegal international trade.

CITES further supported the establishment of a Big Cats Task Force to strengthen action on conserving these high-profile species for Africa and Asia, as well as the African Carnivores Initiative (ACI) between CITES and the Convention on the Conservation of Migratory Species (CMS) on four African carnivore species: lion, leopard, cheetah, and wild dog. This is a unique example of two Conventions cooperating for the conservation of large African carnivores.

All eight species of pangolins were transferred from Appendix II to Appendix I at CoP17 three years ago. At CoP18, a range of trade regulation and conservation measures were adopted to strengthen conservation of these endangered animals.

The conference also considered opportunities to enhance the role of indigenous, local and/or rural communities in CITES decision-making processes and the strengthening of collaboration with other biodiversity-related conventions.

Position of SADC
Throughout CoP18, it was clear that there is a North-South divide across the African continent, especially in the polarized discussions on African charismatic large mammals. Although CITES moves from the premise that decisions are science-based, implementation-oriented and pragmatic, SADC countries did not agree that this is what guided decision-making at CITES CoP18.

SADC's final words to CITES at the closing plenary was conveyed by Tanzania, who spoke on behalf of the following SADC countries: Botswana, Democratic Republic of the Congo, Eswatini, Lesotho, Mozambique, Namibia, South Africa, Zambia, Zimbabwe and Tanzania. SADC expressed grave concern regarding the implementation of CITES and highlighted that they are obliged to ensure that they meet their commitments to international agreements and declarations to which they are signatories, as well as responsibilities to the citizens of their countries. It was stressed that CITES, in its preamble accepted the principle that states are and should be the best protectors of their own wild fauna and flora, whilst the Convention on Biological Diversity confirms that “States have the sovereign right to exploit their own resources pursuant to their own environmental policies, and the responsibility to ensure that activities within their jurisdiction or control do not cause damage to the environment of other states or of areas beyond the limits of national jurisdiction.” SADC contended that CITES, in form, substance and implementation, is currently not aligned with other international agreements of equal weight and arguably greater relevance to the challenges of today and the way CITES is currently operating, is contrary to its founding principles.

Concern was further expressed that CITES currently discards proven, working conservation models in favour of ideologically driven anti-use and anti-trade models that are dictated by largely non-State actors who have no experience with, responsibility for, or ownership over wildlife resources. The result has been a failure to adopt progressive, equitable, inclusive and science-based conservation strategies. It was said that this anti-sustainable use and anti-trade ideology, and not science-based decision-making, dominates decisions made by many States that are party to CITES.

It was also mentioned that the protectionist approach dominating CITES, precipitates the unfounded belief that all trade fuels illegal, unsustainable trade, ignoring clear evidence to the contrary. The new trade restrictions for species that are effectively conserved and utilized in SADC, such as lions and giraffe, were mentioned as examples. This, while the real threats in the countries where such species are in decline due to habitat loss and human-wildlife conflict, continue to go unattended. The consensus expressed through CITES by the majority of states in this regard, was noted as undermining SADC in its efforts to secure social and environmental justice through the sustainable use of our natural resources. In doing so it is compromising SADC countries’ ability to meet obligations and responsibilities to other multilateral agreements and to their citizens.

The populations of iconic African wildlife species in SADC illustrates the effectiveness of conservation models based on sustainable use. Similar examples of successful conservation outcomes have not been forthcoming under ideologically driven approaches to conservation. The consequences of the above concerns of SADC countries, resulted in SADC invoking measures such as announcing a dispute, the first time ever in CITES and expressing that they “can no longer ignore these glaring shortcomings and threats to their national interests” and SADC declared to seriously reconsider whether there are any meaningful benefits from their membership to CITES.