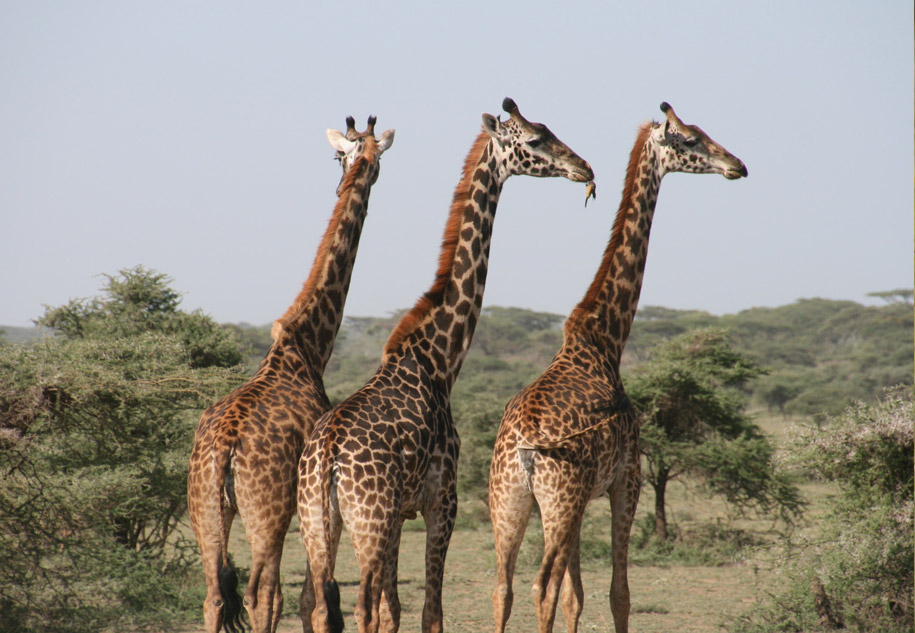 It runs with a stiff-legged gallop, is generally silent even when fleeing danger and can deliver a killer blow to a lion with its huge forefeet. Boasting with the title of being the world’s tallest animal, the giraffe must be one of the strangest looking creatures on earth and has fortunately stood the tests of time with a healthy population in South Africa.

The giraffe is one of the most graceful animals in Africa. It creates an atmosphere of tranquillity in the bush when it moves slowly around the trees foraging on succulent leaves and twigs. Family groups move around unnoticed because their spotted coats blend in well with their surroundings and the animals are mute. The best sound one could expect from a giraffe is like a deep sigh or moan when captured for translocation, but that is about as far as their voices can go. Giraffes are generally relaxed animals with a high tolerance for people. Thinking back to my earlier days in the bush, I remember the giraffes at Shlaralumi grazing around the rondavels so close that you could have almost touched them. Once, hunting in the Limpopo valley at Breslau, I managed to get to within twenty odd meters of the black bull and his family. It was a wonderful experience! If you park off on the ground close to them they will first stare curiously at you and then continue feeding as if the human being is not present.

The very big bulls can reach nineteen and a half feet (in the old terms) and weigh nearly one and a half tonnes. With their slanting backs they remind you somewhat of camels but they bear no relationship with the desert dwellers. The markings on individual animals are unique, but there is definitely a colour morph relationship between animals of the same region. According to reports I get from hunters and game ranch owners, the north-western areas of South Africa from Alldays to Mapungubwe have the very beautiful dark animals, whereas other parts of the country generally have the pale yellowish animals. It is also believed that bulls grow darker with age and I have seen for myself how the big black bull at Breslau has darkened over the past five years. You can still see the spots on the bull even though he is very dark. His offspring range from darker than normal to almost as dark as their own father.

Giraffes are sociable animals that live in smallish herds of up to 70 animals. Cows and bulls have horns and due to the bulls fighting each other they have developed polished horns, while cows have hairy tips to the horns. Calves are borne with short horns that grow longer with age. There are records of twins but they are very rare. Cows nurse their young for a long time, but the calves start browsing after two weeks while still enjoying mother’s milk. The gestation period is a very long 450 days and calves are delivered throughout the year.

One of the challenges of tracking giraffe for observations and photography is to be sharper than the oxpeckers that are very closely associated with these animals. Since giraffes are docile they are very tolerant to the sharp claws of oxpeckers. It is quite funny to observe how an oxpecker disappears into the ear of a giraffe and emerge half a minute later. Yellow-billed oxpeckers feed not only on ticks and other biting parasites but also eat the earwax of large animals. They also rest on giraffe and may be found sleeping on the shaded side of the animal in the heat of the day. Unfortunately for the observer oxpeckers have extremely good vision and alert their hosts to human presence long before the people actually see the giraffe. It is best to approach the giraffe very casually and slowly and it is possible to get to within twenty odd paces of a herd.

Giraffes are browsers using their long tongues to eat the leaves and twigs of tall trees that are inaccessible to other browsers. Watching them feed sends a chill up the spine as their tongues work through the sharp thorns but this is apparently no problem for them. Droughts are very hard on giraffes. Their food is at the highest level of the vegetation regime and if the leaves wither away the animals suffer tremendously. Some game ranch owners feed their giraffes during droughts in tall feeding-troughs but even that is not always sufficient.