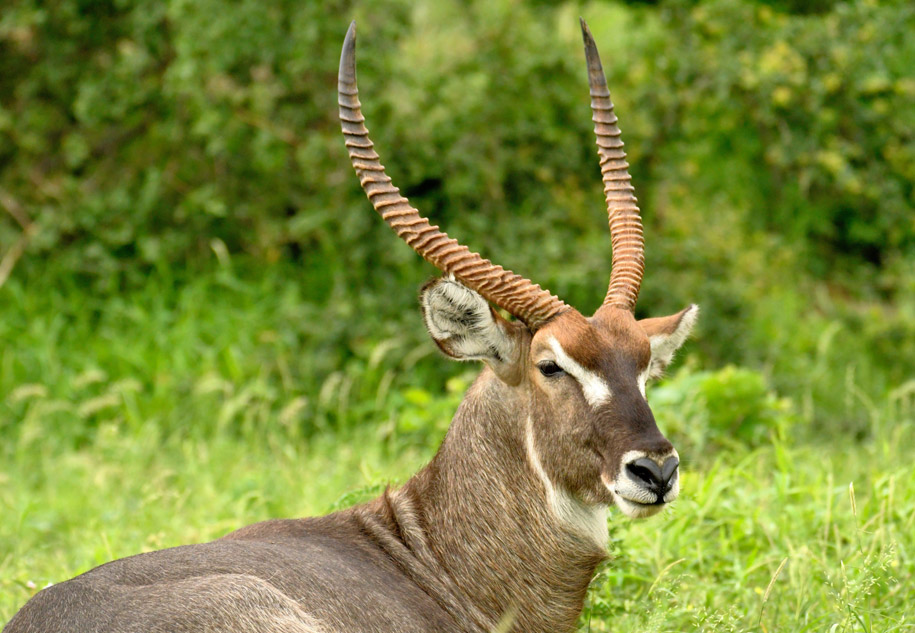 The white ring on the buttocks of the waterbuck gives it the descriptive Afrikaans name of kringgat. It is indeed a beautiful and graceful antelope that sticks to the denser woodlands of Africa and it is always associated with water. Waterbuck are not aquatic animals but tend to keep very close to water and will take refuge in deep water when threatened by predators. Food is mostly guaranteed around water and provides the waterbuck with the succulent grass that it feeds on. Herds of waterbuck include cows, calves, young bulls and often a couple of real trophy bulls. Big bulls have curved horns that reach up to 40 inches in length and can be used effectively as defence against predators and adversaries.

The scientific name of the waterbuck Kobus ellipsiprymnus ellipsiprymnus reflects on the ring around the buttocks, while Kobus ellipsiprymnus defassa is reserved for the East African Defassa waterbuck. Waterbuck are cousins of the lechwes but are larger and heavier than their more aquatic cousins. Waterbuck occurs along the major northern rivers of South Africa but have recently also shown up on some farms in the Northern Cape. I was dumbstruck when a good bull ran over the road on my way to Kuruman some two years ago. Maybe the water-bodies and dry riverbeds of the Kalahari have been harbouring waterbuck without our knowledge.

My own experiences with waterbuck have been nothing less than a mixture of the fantastic and the tragic. Walking and stalking in the bushveld offer a good opportunity to get very close to these dignified animals. Herds are usually in dense vegetation around water by midday and the animals are relaxed. Cows and calves remain static if you approach them slowly, but bulls get a little nervous and usually trot off in a stately gait. In the very dry periods when landowners provide fodder for their game, the waterbuck herds never leave the feeding spots. This worries me as it makes a case for unethical hunting around waterholes and feeding spots. Nevertheless, the waterbuck I have encountered around feeding spots offered a chance to learn about their odour and behaviour.

Waterbuck are silent and seldom emit any sound. When startled they simply take off and disappear into the woodland. They don’t run very fast nor very far. When there is water close by and the threat is significant the animals may swim into deep water, and run the risk of falling prey to crocodiles.

Many people firmly believe that the meat is inedible due to the scent glands that produce a musky odour, while others attest that there is nothing wrong with waterbuck meat. The animals are easy to locate in the veld if you know their scent and their droppings are also conspicuous. Unlike kudu and impala that produce loose pellets, the waterbuck’s pellets are gathered into loose fist-sized lumps.

Waterbuck do not tolerate drought well. I have seen many animals on their last legs in severe drought conditions and they usually perish just after the kudu population start dying out. One great bull with beautiful horns on one of my hunting destinations got so thin that he wouldn’t even run away when I approached him. It was tragic to see such a magnificent beast starving to death. I hoped that he would make it but when I returned to the farm six months later I couldn’t find him. He definitely wasn’t hunted as I made a deal with the landowner not to have him shot by anyone.

Lions and wild dogs are the main predators of waterbuck while cheetah and leopard will sometimes take calves. It appears as if the waterbuck is an easy target for wild dog as they become exhausted quite rapidly. It is therefore nor difficult for the dogs to run a waterbuck down. Fortunately, waterbuck breed well and populations easily replenish their natural losses. Not many hunters take them mainly because they believe the meat is inedible. They do fetch good prices though and are always regarded a good investment for a game farm.