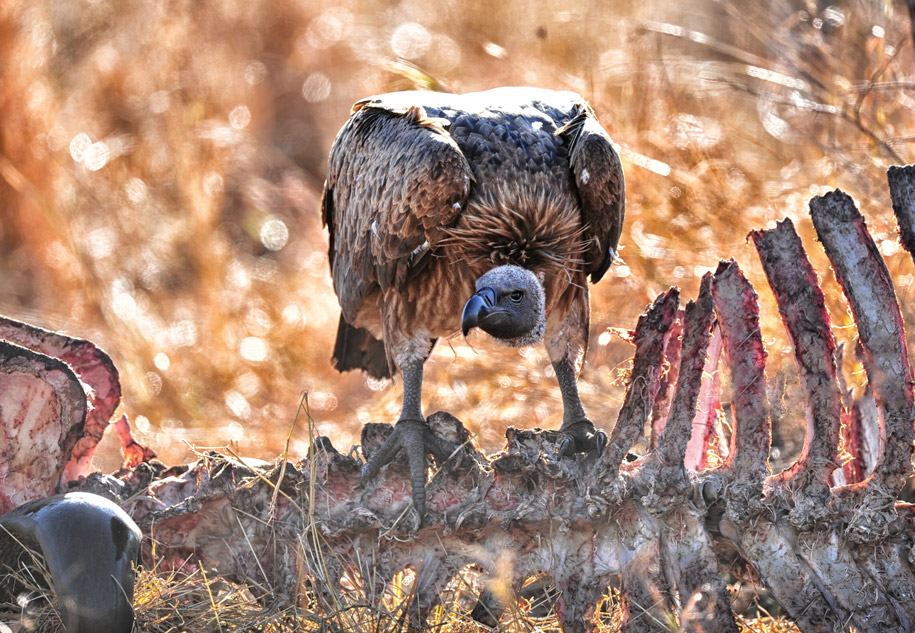 On 8 November 2017, the VulPro vulture conservation centre near the Hartbeespoort Dam in North West Province, made history when it released 35 vultures back into the wild at the Nooitgedacht Cape Vulture breeding colony. It was the first release of its kind on the Africa continent and an important milestone in a vulture conservation programme to supplement natural populations of the Cape Vulture and the African White-backed Vulture. 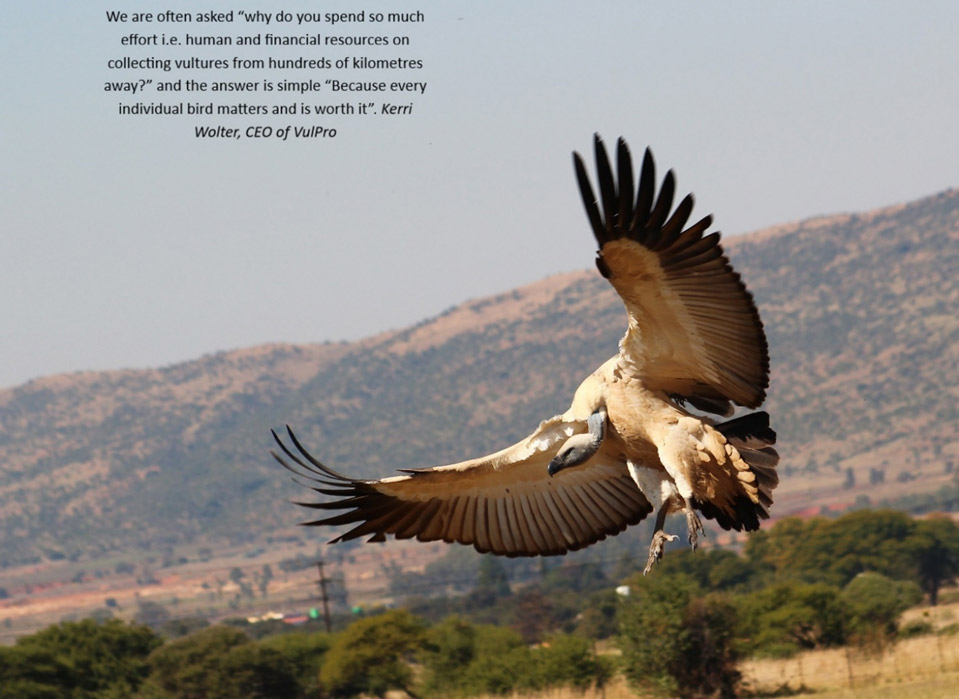 Twenty of the released birds were captive-bred, while 15 comprised rehabilitated birds of three different vulture species.

2017 has been a busy year for Kerri Wolter, CEO and founder of VulPro, together with her team of dedicated staff and volunteers that work around the clock to save Africa’s vultures. Between 1 June to 30 November 2017, VulPro has collected and rehabilitated 27 vultures.

IUCN Red List
The Cape Vulture, also known as the Cape Griffon, is listed as endangered on the International Union for Conservation of Nature (IUCN) Red List. It is endemic to southern Africa, and is found mainly in South Africa, Lesotho and Botswana, with an estimated 4000 breeding pairs left. They are extinct as a breeding species in Namibia, Zimbabwe and Swaziland.

Vultures are not always seen as the most charismatic of animals. They are burdened with negative connotations and there is general ignorance about their role in nature. Vultures play an important ecological role in clearing the veld of carcasses and they are the most efficient scavengers on the planet. They rapidly consume the remains of dead animals and thereby prevent these carcasses from acting as host to various diseases that may spread to livestock. 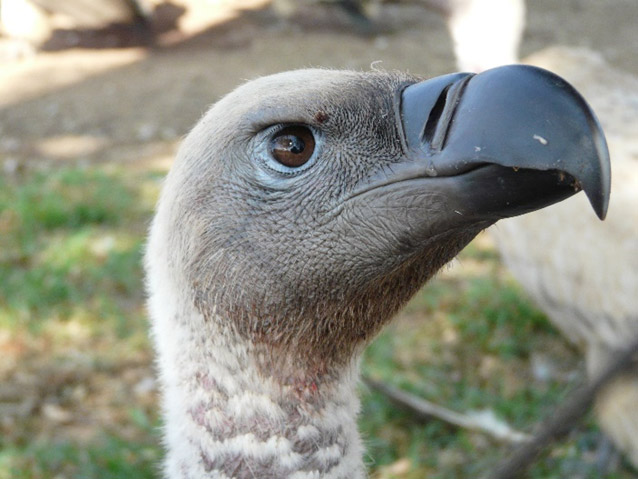 Kerri established the rehabilitation centre in 2007, to follow her passion for vulture conservation. The centre relies totally on sponsorships and donations. Situated near the Hartbeespoort Dam to the west of Pretoria, VulPro is home to approximately 220 grounded and injured birds of prey of which most are Cape Vultures and African White-backed Vultures. Other birds at the centre include Palm-nut, Lappet-faced and White-headed Vultures, a pair of Andean Condors, a pair of Black Eagles and a very vocal fish eagle whose familiar call welcomes visitors to the centre.

Conservation breeding programme a first for Africa
Early in 2014, VulPro introduced its conservation vulture breeding programme aimed at supplementing diminishing vulture populations in southern Africa. Although similar programmes have been hugely successful in the US and in Europe, it has never been attempted anywhere in Africa. According to Kerri, South Africa – and the African continent -  is about twelve years behind in vulture conservation compared to the rest of the world.

“It is a new milestone for us. Nobody has focused on conservation breeding as a conservation tool for vultures in Africa before. We are very fortunate to have visiting vulture breeding experts from the USA and the UK to provide guidance with our breeding programme. We believe that collaboration with reputable organisations elsewhere in the world, will yield positive results,” Kerri said.

She explained that a repopulation programme is a long process. It takes two vulture generations before one can claim successful supplementation. VulPro’s breeding process starts with the captive vultures that can never be released into the wild because of the permanent nature of their injuries, but they are fit to breed.

Artificial nesting areas and nesting material are provided in the enclosures to enable the vultures to build nests. When a female vulture produces an egg, it is taken away and replaced with a dummy egg. The real egg, if fertile, is incubated artificially. Once the young bird has hatched, it is hand-fed and observed by VulPro staff for a few days before being returned to its parents. Vultures are excellent parents and immediately resume their role of feeding and caring for their off-spring.

The young captive-bred and parent-raised birds are moved into the release enclosure when they are approximately eight months old. The birds are fed to make them dependent on that site. It takes about seven years for a vulture to reach maturity to breed. The off-spring of the captive-bred generation does not imprint on humans and can effectively contribute to wild populations.

“If our breeding programme is successful, we can start reintroducing Cape Vulture to Namibia and Zimbabwe where they are now historically extinct as breeding species. That is when you start making an impact,” Kerri said.

Threats to vulture survival
Most of the vultures at VulPro were injured in collisions with Eskom powerlines. Although VulPro’s focus is to rehabilitate and return vultures to their natural environment, many of the affected birds will never fly again because of the severity of their injuries. 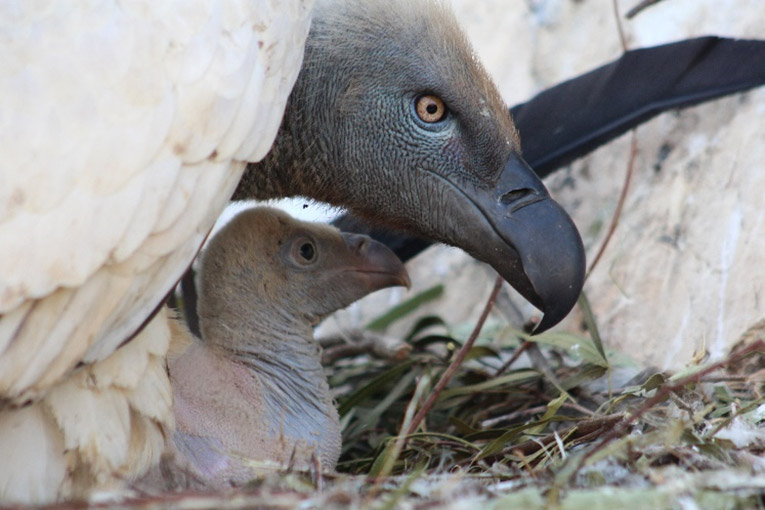 “The reality is that South Africa’s vultures could face extinction within the next four decades if interventions to save the species are not successful,” says Kerri. The main threat to vulture populations in South Africa is the expansive powerline grid. Vultures prefer to perch on powerlines because they provide the highest roosting spots available from where the birds can take off easily to catch thermals.

The thin earthing wire installed above the powerlines is invisible to birds, causing them to fly into the wire. Vultures have a wingspan wide enough to touch both terminals, resulting in electrocution and horrific burns and/or death. In some areas, Eskom fitted spirals to the earthing wire to make it more visible to the vultures. Powerlines can also be designed to be bird-friendly by widening the gap between live conductors or between live and earth phases.

The other threats to vulture survival include direct and indirect poisoning; poaching; and shrinking habitats for foraging. Poachers looking for vultures to supply in cultural and superstitious beliefs, often lace carcasses with poison, killing large number of vultures and other scavengers. There is a demand for vulture parts, especially the head (brains, eyes) and feet, which are used for luck or to forecast the outcome of events, i.e. the winner of a soccer match. This highly commercialised illegal trade is rampant throughout South African communities. These threats are on the increase and are causing an African vulture crisis.

Unintentional poisoning occurs when vultures forage on the carcasses of cattle that had been treated with non-steroidal anti-inflammatory drugs (NSAIDs), which can be lethal to vultures. Drugs containing Diclofenac (the active ingredient in Voltaren) caused the deaths of millions of vultures on the Indian subcontinent which led to the Asian Vulture crisis in the early 2000’s.

Mitigating factors
Kerri believes a lot more can be done to make powerlines safer. VulPro and other conservation entities have been working closely with Eskom in finding solutions, but there is no quick fix.

Shrinking foraging areas and habitat loss have prompted the creation of vulture restaurants all over South Africa. These sites serve a dual purpose: They offer food to the vultures and provide a site where farmers can safely dispose of dead livestock.

Kerri emphasised the importance of strict management of these sites to ensure that the carcasses do not contain harmful substances (e.g. NSAIDs) or lead. Vulture restaurants should also be strategically placed at a safe distance away from powerlines to reduce the risk of birds colliding with these structures.

[box color="green" icon="icon-none" title="Dr Gerhard Verdoorn, President of SA Hunters and Director of the Griffon Poison Information Centre comments:"]“Lead poisoning is a reality that vultures are facing. Several studies on vultures in South Africa showed that most vultures have sub-lethal levels of lead in their blood, but it remains inexplicable as to the origin of this lead.

One possible explanation is lead from hunting bullets, but that is hardly scientifically verifiable as vultures do not feed on wounded game animals as much as the feed on natural mortalities.

A more reasonable hypothesis is the lead emanating from decades of tetraethyllead in petrol as the underlying cause of widespread lead contamination in vultures. However, a single ingestion of a 5.6-gram sliver of lead will kill a vulture within five weeks if the bird is left untreated.

Therefore, it is critically important that hunters who donate parts of the animal carcasses they hunted, cut out and dispose of any parts where lead core bullets entered or left the carcass. It should not be left at vulture feeding sites.

The use of premier bonded bullets prevents lead contaminations of meat to a large extent, while the use of monolithic bullets eliminates this problem complete.

SA Hunters advocates the use of monolithic bullets in conservation areas where there is a possibility of vultures scavenging on animals that were hunted."[/box]

Technology, tagging and tracking
VulPro releases vultures that have recovered sufficiently and are fit to fend for themselves. The birds are tagged and fitted with tracking devices, which Kerri monitors daily. “The use of technology helps us to learn more about the vultures, where they go, and how far they forage. Technology cannot save a species, but it teaches us where to focus our conservation activities. We cannot become lazy and rely on technology. If a bird has not moved for two days, we go and find it. Even if it is dead, we need to know. When you place an invasive device on a bird, you are responsible for it.”

Kerri encourages the public to report sightings of tagged birds - dead or alive - to VulPro. The staff will drive to the site to collect the bird, regardless of where it is.

Education for conservation
Education programmes and public awareness campaigns are part of an integrated communication and conservation strategy at VulPro. School children and youth groups are important focus areas for educational programmes, but for Kerri and her team, it is equally important to educate adults.

“Adults are the decision-makers on matters that can impact on conservation and wildlife management in the shorter term. It is our mission to educate people of all ages and all demographics to ensure that conservation efforts are sustainable for decades to come.

“We also have to deal with purist conservationists that believe we should not interfere with nature at all. They do not support our captive-breeding programme. Do you leave things to nature to sort out and watch vultures become extinct, or do you manage populations and preserve the species? We believe it is our responsibility to manage wildlife.” 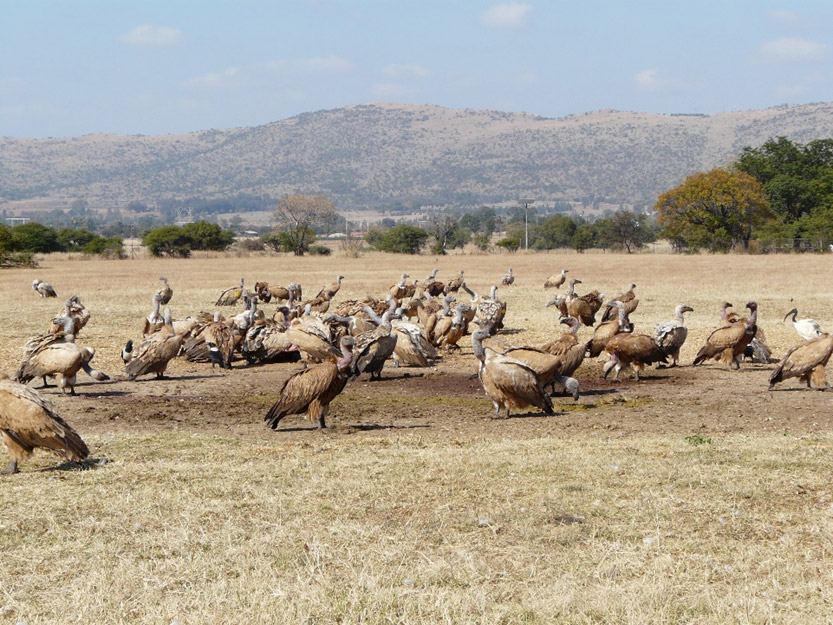 More information
VulPro’s website features comprehensive information about vultures and the activities of the rehabilitation centre. Visit http://www.VulPro.com or join their Facebook community for regular updates and photographs on the captive-breeding programme and other activities.